Elaine B. Osborne, Steve Nichols, Roger Poe, and Phyllis Bobbitt sought to share their astronomy experiences with each other individuals in their surrounding areas.

Elaine moved here from Mobile, Alabama, where she was active in the Mobile Astronomical Society.  Steve and Roger had long been observing in the mountains of Southwest Virginia.  Phyllis was a librarian at the Wythe-Grayson library and enjoyed looking up at the night sky and reading all about our Universe.

Elaine was disappointed to find there was no astronomy club in Grayson county or the surrounding areas. She had gone to the library to seek other folks interested in astronomy.  After posting on the local web bulletin board with no serious response, she was beginning to become very discouraged.  It was then that her daughter brought to her attention an article in the Galax Gazette featuring Steve with his scope surrounded by Girl Scouts. (Unknowing to Elaine her daughter called Steve to tell him about her mother moving here and how discouraged she was that there was no astronomy club in the area and would it be ok if she called him.)

Elaine called Steve and he was at her door within the hour, the desire to continue this hobby was off to a start.

The first meeting was held at the home of Tommy and Elaine Osborne on Echo Ridge in Elk Creek, Virginia on  December 6, 1996.  In attendance were amateur astronomers from Sparta, NC, Mouth of Wilson, Elk Creek, Galax,  Hillsville, and Independence, Virginia. At our first meeting we selected our first president, Elaine B. Osborne; named our club; Echo Ridge Astronomical Society, Stated our purpose: ERAS would pursue the science of astronomy by observing our dark skies, learning together the latest technology and sharing this knowledge and experience with all members.

At a later meeting we had a contest for the design for our club Logo.   Steve Nichols won with his design showing the the State of Virginia in green with a Star indicating the location of our club and the letters ERAS printed across the logo. 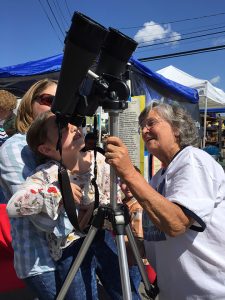 Elaine seen here teaching how to view the Sun through special solar filtered binoculars at one of our club outreach events.